We met Matteo Ficara many times during our journey on the KINDNESSforBusiness path, talking about innovation, new organizational approaches, and models. He is a philosopher, a CHO[1], and a certified Positive Genius. He also created and manages “La specie Felice" (The happy species, NdT). His last book "Andata e Ritorno. Istruzioni per il viaggio immaginale" (Roundtrip. Instruction for the imaginal journey, NdT) is about the power of imagination.

It is a great pleasure for us to meet Matteo and give space to his interview on our website, as we particularly resonate with him and his message.

What is your meaning of kindness, the one that you live every day?
As a philosopher, I wanted to start from kindness "gentilezza" etymology to understand it deeper[2]. It is a complex journey from the Latin term "gentile" to "gente"[3].
The “gentile” was the roman nobleman who belonged to some people or family. Instead, "gente" has an Indo European root G'AN, from the Sanskrit “g’â-yati”: “born”, “become” then resumed with the meaning of "family / race".
At first sight, Kindness seems to be a trait that allows for the process of acquaintance to begin, providing a sense of family and belonging to a group or a set, a society, a species. Recently I have read again the "Hyginus's fable"[4], introduced in "Being and Time" by Heidegger. It is a tale about the proportion of the relationship between care and humanity. For me it is important to remember it, because if kindness is the trait of "making family", of the sense of belonging, of becoming "gens", we have to remember that those gens (people) are humanity. We have to ask ourselves, then, what does "being humans" mean. The message of the tale is poetic and pragmatic at the same time: humanity is, and always will be, bound to the soil, to that humus that gave us our name. It is a reminder about our beginning as a mud puppet and our end as soil again.
Our body is that humus, that soil. Our life force, our soul, is spirit. In Hyginus's fable, at our time of death, the soil will return to Earth and the spirit will return to the sky (Jupiter). However, during the lifetime, the human being will be of the Care, the One who molded him from the mud. Finally, body and soul have their place, and so life: in the hands of the Care. Care for oneself, for the others, for the whole planet.

What a beautiful fable, Matteo. So for you, is it then, a transition from gens to family, to the human being, to the Care?
This is where kindness jumps in: is the application of care for others, a “modus operandi” based on delicacy and fondness that allows us to stay in Care, and so in life itself. A life choice that leads us to become two, to become a relationship, a couple, a family. A way of being that keeps us in this "humus" that makes us human, which creates us. It keeps us in this care that allows us to stay in the "life", in that fondness and compassion, which enables us to feel united in a species and to survive the challenges of evolution.
Kindness as compassion was also recognized as one of the emotions that allowed human evolution. The anthropologist Margaret Mead formerly asserted that civilization was born in the moment we stopped in order to take care of our fellow human beings.

You created with your wife Lara Lucaccioni (Master Trainer in Laughter Yoga, Cardiac Coherence and Science of Happiness) the community "La Specie Felice". Which connections do you see between its themes and kindness?
During my timid research in the anthropology environments about kindness, I discovered the species theme. It is a deep and necessary theme, which has a lot in common with the Kindness that enables us to become a (huge) family.
We were in 2016 during the project "Portatori di Unicità" (bearers of uniqueness, NdT), presented in the "Sala Regina", in Montecitorio (seat of the Italian Chamber of Deputies, NdT) and the lessons were in the Sapienza University, in Rome. It was unforgettable! I was called to participate as a speaker about the theme of respect, and I was amazed: since many years I have been in the imagination field and I didn't have much to say about respect.
Then instead, I rediscovered respect. The etymology of respect is "re-spicere", whereas "spicere" is from species. Species meant as the face, as the image whereby a species differs from another one. Here the imagination, here the respect, here the species.
From that day we gave birth to the idea of "La Specie Felice”, now it is a project and a Facebook group. The commitment we, my wife and me, took was to foster a culture and some practices that allowed us to become “the happy species”. We also interviewed Daniel Lumera about kindness. But, you know, our species is like a big family, and what makes us "gens" is that way of living that is ethical, active, loving, eco-friendly (remember, we are humus) and based on care: kindness.

So can we assume that kindness is something needed only in relationships with others?
We are individuals before being a set or a "gens". Even our identity is based more on qualities like kindness rather than the memory of ourselves. At least, this is what two papers by Nina Strohminger and Shaun Nichols (2013 and 2015) state:
"Contrary to what generations of philosophers and psychologists have thought, memory loss doesn't make someone look like a different person", Strohminger writes. "Rather, morality [...] played the most important role in determining whether someone presents themselves as themselves."[5] At this stage, we can think that kindness makes us what we are, but at the same time it requires effort, a movement or an action.
This reminds us of that inner force that helps the seed to sprout, and in fact, if I have to define a personal definition for kindness I would say: Kindness is the continuous micro-effort of loving care, which takes part in building a different present and future, more meaningful, happier.

I appreciate and share this connection to a micro-effort, as you said: this gives more concreteness to the term. Do you think that the act of kindness, or acting kind, can create both an individual and relational impact?
To act with kindness helps us to stay in the moment. It enables us to sow a little gift that blossoms in a smile. Because of that smile, an entire bad day can change direction until becoming a blessed one.
To act with kindness brings us closer to the cure, both of oneself and of the other. It makes us humans. That is because we enter again into a continuous process of relationship, fondness, ethical and ecosystemic responsibility.
To act with kindness generates relationships, family, species. It allows us to catch our most beautiful face and to extend it far, until becoming a safe horizon to land. We become one beyond separation.
Ultimately, to act with kindness makes us kind. It makes us feel that deep sense of belonging to a huge family. It makes us feel uplifted and fulfilled at the same time. It makes us become the gift[6] we are.

Thank you, Matteo, for your amazing words and your profound reflections. You have brought us precious insights and sources to deepen. See you soon!

Matteo Ficara is a philosopher, writer, CHO (Chief Happiness Officer). Creator of the method of thinking "The Rooms of Imagination®". Co-founder of “Happiness for Future srl” and of the community “La Specie Felice®”.
Philosophy, Happiness and the Future are the three themes on which he constantly researches, together with the search for meaning in living, as a philosophical model of life.
He has a rich production of articles and his latest book, the fourth, was published in May 2020 by Spazio Interiore Editions, with the title "Andata e ritorno. Istruzioni per un viaggio immaginale” (Round trip. Instructions for the imaginal journey).
He also shares his research and visions as a speaker on the stages of live events or in online interviews and, every day, in the community "La Specie Felice", which he animates with his wife Lara Lucaccioni. 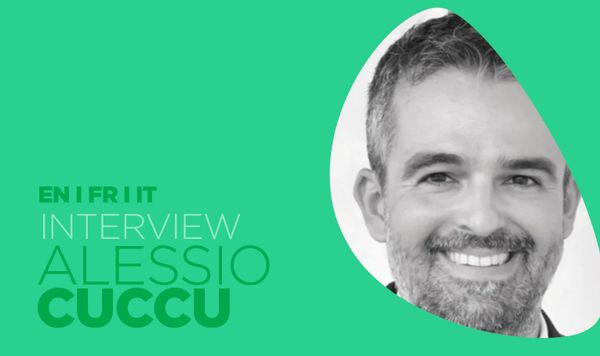