This week, we are proud to welcome in our pages Sergio Caredda (whose blog and weekly newsletter, sergiocaredda.eu, has inspired us so many times) for a brand new article focusing on Gender Equality. If your organization is still facing this kind of issues, we hope Sergio's view will inspire you to change !

We're now in year 3 of a Global Pandemic that has disrupted the world profoundly in many areas, and its ripple effect will probably last way longer than we can envisage. A particularly problematic aspect is that Covid has stopped the clocks of many UN Sustainable Goals [1]progresses in many ways. Not formally, but most organisations, from the smallest business to the most prominent institution, have prioritised actions in a moment of need.

I am apprehensive about what is happening in the World of Work today, a core topic represented by SDG8 "Decent Work and Economic Growth", but that transversally touches also other SDGs, above all SDG1 "No Poverty" and SDG5 "Gender Equality".

A Crisis of Empathy 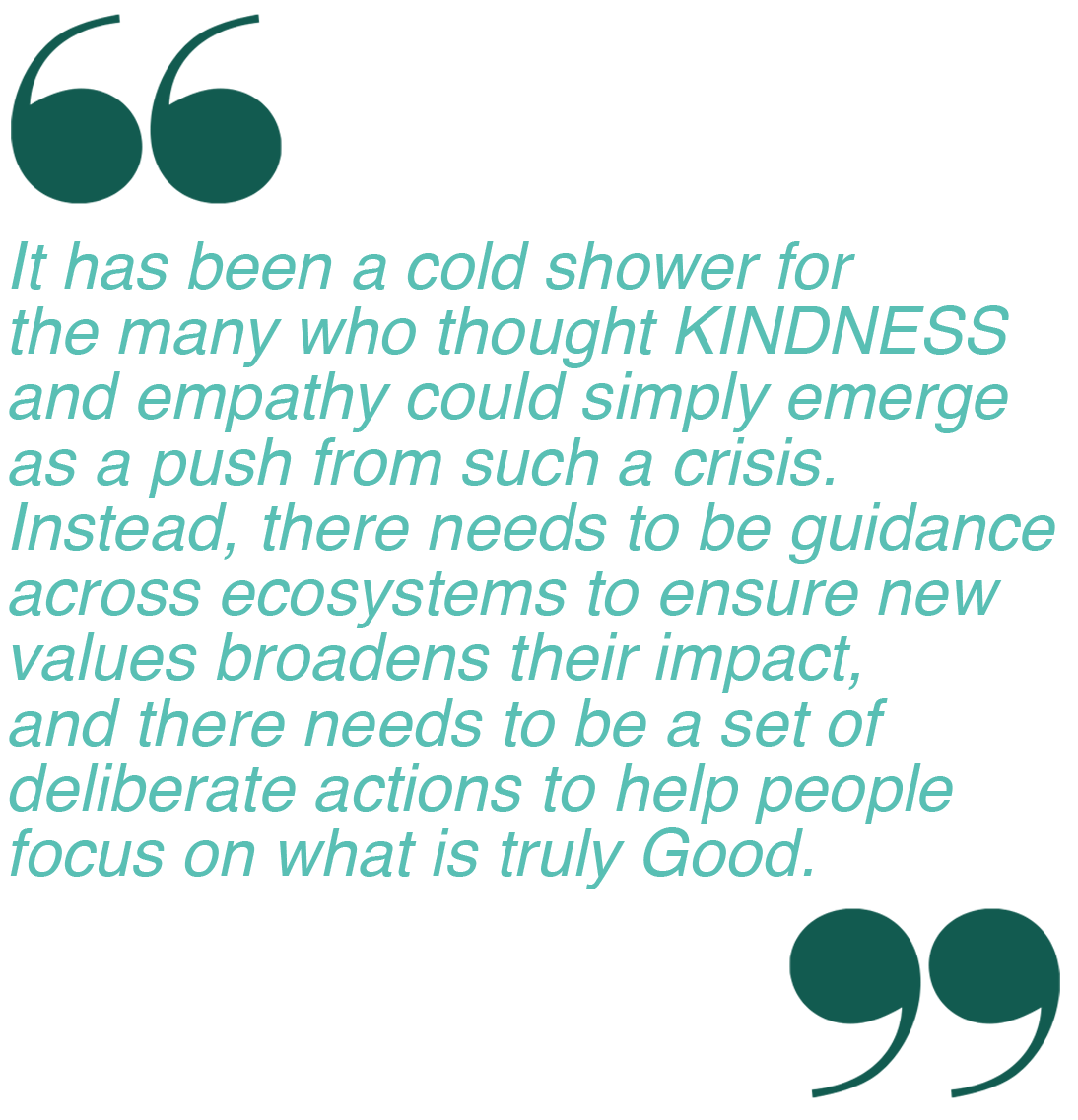 In many ways, we got somewhat distracted by the immediate reactions during the first months of the pandemic. A boost of human empathy seemed to be seen across most countries[2] as many experimented for the first time a lock-down. From the communal chants from the balconies in Italy to the spontaneous support towards healthcare, retail and logistics workers (perceived, among others, as "saviours" of the residuals threads of our lifestyles), there was a distinctive feeling of positive collective empathy that seemed able to bust this new challenge across the continents. Yet as the first phase ceded the stage to the second one in most countries, this empathic revolution left the ground to a harsh reality made of more robust individualism, burn-outs, mental problems and weakening societal ties. The tensions very well represent all most countries have faced with no-vax movements[3].

It has been a cold shower for the many who thought KINDNESS and empathy could simply emerge as a push from such a crisis. Instead, there needs to be guidance across ecosystems to ensure new values broadens their impact, and there needs to be a set of deliberate actions to help people focus on what is truly Good.

We need to be Intentional.

From my perspective, this calls, once more, for a focus on intentional actions versus waiting for emergent trends to show themselves off. This is especially true for areas where transformational change is required. So let me focus on Gender Equality.

Data across Western countries and beyond shows that Covid has disproportionately affected female work[4]. Although some part of the research concedes that Covid-19 has not increased the Gender Gap[5]. for sure, it has not created an improvement of the pre-conditions that still today are at the origin of that large gap still existing in many countries.

So, what can companies do to bridge that gap? Today more than ever, it is a matter of Intentional Design. Leadership within organisations needs to create deliberate practices to close that gap and do this now.

Diversity in the Intentional Organisation

I have been researching the concept of intentionality in organisation design for some time now, to the point that I have often referred to the idea of Intentional Organisation. It is not a new organisational model nor a new managerial philosophy. Instead, I want to draw attention to the fact that all organisations are made of several organisational artefacts, for which management rarely looks at design. Elements like Strategy, Business Model, Operating Model, to name a few[6], are very often taken for granted within the standard ways of organisational life. It would be not easy to review each of these systems constantly, and probably it's also not necessary provided all the components are consistent among each other. 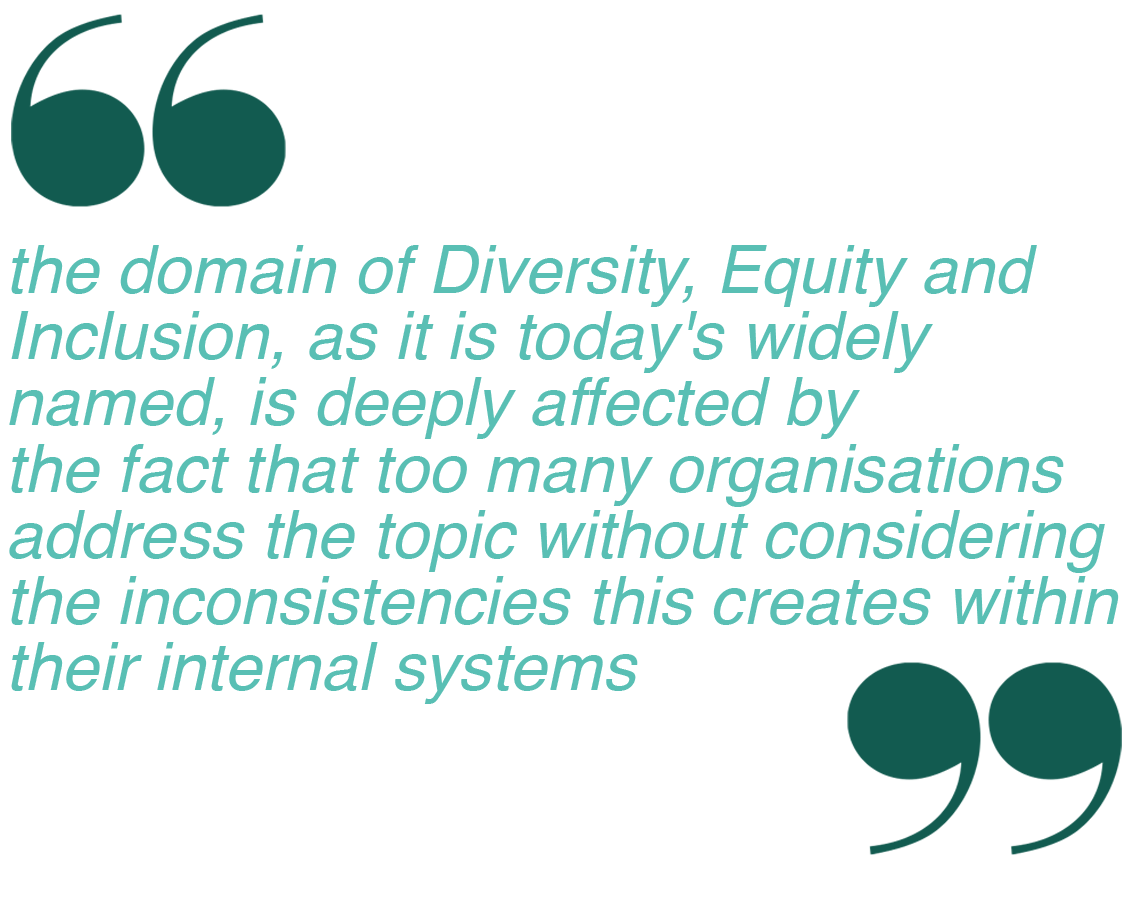 Where the problem lies is when there are inconsistencies: the organisation action becomes fragmented, energies get dispersed in trying to preserve some form of coherence, people get confused, ultimately customers will start noticing, and the organisation will experience performance issues.

Why is this relevant for our topic? Well, the domain of Diversity, Equity and Inclusion, as it is today's widely named, is deeply affected by the fact that too many organisations address the topic without considering the inconsistencies this creates within their internal systems. The most typical example is when Diversity is managed as a Policy, but the minimal effort is made in supporting the necessary Culture Change

Being Intentional about Gender Equality means taking deliberate actions. At least 3 of them.

You need to recognise that Merit alone will not be sufficient. We live in a society that celebrates Meritocracy as a value in the Work domain. Yet, as Michael J. Sandel demonstrates in his book The Tyranny of Merit this ideal "is not a remedy for inequality, it is a justification for inequality"[7]. Let's make a simple example. One of the core issues around gender equality in the last few years is the scarce representation of women in so-called STEM disciplines. There are multiple reasons for this. Some are deeply rooted in our cultures, that simply waiting for education systems to make up for this is not sufficient. Our meritocratic ideal looks very much into an equality of results which essentially means we're all ready to hire that female engineer. But this does not recognise that there isn't an equality of opportunities[8]. How many women with the potential to become IT experts have been routed by life into other domains? If, as an organisation, we have a substantial gender gap in our technology department, we need to take action and hire women also from other domains, testing transversal competencies such as analytical skills, and providing training and mentoring to fill a competency gap that is the result of discrimination still ingrained into our national system.

You need to hire more women at all levels in the organisation. This is the single most crucial action an organisation should be doing. Yet, there are so many resistance points to this single action that all the rest will seem easy if compared. This comes down to an effortless action that every manager should do: hire women on (at least) a 50% basis across all the roles they open. It boils down to this very simple and disruptive action: deliberately hiring. Once you acknowledge the issue with Meritocracy we have mentioned above, most alibi for not hiring women will be gone. Which also makes this a very easy to measure activity.

Action 3: Remove obstacles for career. All of them.

You need to remove all obstacles to careers. Most companies have somewhat managed to get an inflow of female employees into their organisation, but progress in promotions and careers seems to be a lot more complicated. There appears to be a sole culprit for this: maternity. If this were the case, there would be several easy fixes that could focus on the logistic aspects of dealing with a child after maternity (including a stronger focus on paternity leave) and several policy choices around not penalising the mother for the period of maternity leave.
Yet a broader issue is much more complicated to sort out because policy mechanisms alone don't work. For example, I'm sure many have heard the statistic that Women seem to apply to a job only if they see themselves as 100% fit, while men do so if they see themselves as 60% fitting. This stat came from a Hewlett Packard Internal Report and have consistently been seen as a confidence issue for women. It translates into: "we give you the opportunity if you don't take it, sorry, your fault!" The point is that here also comes a distorted view of Meritocracy, where women tend in reality to be much more strict in following rules. In contrast, men tend to play the "old boys club" rule and exploit their network to gain access to promotions, more often based on potential than performance. This topic needs to be addressed by constantly measuring how the internal career and promotion process works and adopting deliberate measures to advance women.

You need to ditch old style design methods, and concretely build your organisation for belonging. This means that our intentional action cannot limit itself to issuing a Diversity Policy, holding a few bias training and developing a quarterly dashboard with pink and blue bars.
After all, the evolution itself of the issue (moving from Diversity to Equity, to Inclusion, to Belonging) can be seen by easily associating a more significant component of intentionality for each concept. Diversity can be made of essentially a policy and a few targets. Equity is a bit more complex but is essentially also about following rules. Inclusion already calls a lot more soft aspects such as Leadership and culture into play. Belonging, instead, calls for consistency at all levels in the organisation's fabric, as it translates in a feature of the individual that wants to belong to the organisation.
This means applying strategic choices in design of every element of our organisational system keeping in mind Belonging as a desired output. I have detailed elsewhere the necessary steps to achieve this, which boils down to creating virtuous cycle of awareness to transform your organisation into a Deliberately Developmental System where each actor can flourish[9].

Gender Equality is not a nice to have feature for organisation. It is a mandatory step for the evolution of our societies, and a strategy that makes absolute business sense[10].
This is why it deserves intentional focus and deliberate action.

This quote by Sean McCabe I recently stumbled across, despite being written in the focus of Time Management, nurtures with its self-evidence my core thesis. Gender Equality will be achieved only depending on the time and resources we deliberately invest in.

Passionate about Organization Design, Talent and Transformation, defines himself as a “Digital Knowmad”, a Rebel on a mission to put Humans back in HR. Through his blog and weekly newsletter, sergiocaredda.eu, he develops open conversations on these topics, introduces the concept of Intentional Organization and explores The Meaning of Work.